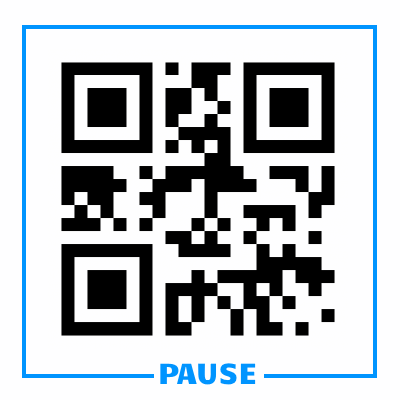 The podcasting system can detect a correctly displayed QR code which allows the recording to be paused. Click on the image to the right to download the QR code (if the image displays in the browser rather than downloads, right-click on it and choose “save as”).

In non-video camera locations – when the QR code is used, the system automatically pauses the recording for as long as the QR code is displayed and resumes once it is no longer shown. Note that using the QR code to pause recordings will also remove content for any DASS students on the course and should only be used when appropriate, for example when there is a break during a lecture, or before the lecture begins.

In video camera locations – only if the video camera is used – rather than pausing the actual recording in real-time, when the QR code is displayed its timings are stored in an edit file, which is then used to remove those sections when the recording is being processed. The original, unedited recording is stored by the system so if it is recalled for editing – the full, unedited version will be available to edit.

Where do I get the QR code?

Click on the image of the code above to download the it – if the image displays in the browser rather than downloads to your device, right-click on it and choose “save as”.

What size should the QR code be?

At least 15% of the width of the slide, an example is shown in the image and template below.

The QR code takes 1/30th of a second to be recognised and a brief flash of the content may be seen. In order to edit out an entire section of a lecture you may wish to have a QR code slide before as well as on sensitive content.

Can I use any QR code?

No, you must use the provided QR code.

Can I position the QR code anywhere?

Yes, but we recommend not placing it directly at the very edge of the slide as some projectors crop the edges and this can prevent the QR code from being detected.

Can I distort, animate or cover the QR code?

No, doing any of the above will limit the ability of the system to recognise the QR code.

Does the QR code work with document cameras (visualisers)?

Yes, however it is more difficult to assess minimum width as the zoom level of document cameras can be changed.

Does the QR code work with the video cameras?

Yes however, as mentioned above, it does not pause the recording, it creates edit points which are used to edit out sections when the recording is processed. The QR code would need to be shown on the projector or visualiser.